With over two million inhabitants, Nagoya is Japan's fourth most populated city. It is the capital of Aichi Prefecture and the principal city of the Nobi plain, one of Honshu's three large plains and metropolitan and industrial centers.

Nagoya developed as the castle town of the Owari, one of the three branches of the ruling Tokugawa family during the Edo Period. Much of the city, including most of its historic buildings, were destroyed in the air raids of 1945. The Toyota Motor Corporation maintains its headquarters just outside of Nagoya.

Nagoya is served by Chūbu Centrair International Airport (NGO), built on an artificial island in Tokoname. The airport has international flights and a high volume of domestic flights.

The Highlights of Spring

One of the best parts of spring is definitely the cherry blossoms. They bloom in parks, on street roads, on the mountains or along the riversides. Sakura trees planted in various places all burst into a light pink at the same time. The time that the sakura bloom depends on the climate each year, but usually around March the cherry blossoms slowly start blossoming from the Southern regions of Japan, working their way up to the Northern areas.

Sakura are of course beautiful when they are in full bloom, but they are just as beautiful when the petals begin falling from trees, and it looks like snow falling. The cherry blossoms are great to be observed not only in the afternoon, but also in the evening. This is called yozakura (night time sakura viewing), and presents a different view of these flowers' beauty.

The voltage in Japan is 100 Volt, which is different from North America (120V), Central Europe (230V) and most other regions of the world. Japanese electrical plugs and outlets resemble North American ones. Plugs come in various versions, but most commonly they are non-polarized and ungrounded with two pins. 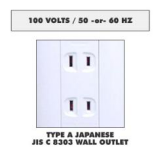